Traditions alive and thriving on the sunny plateau

All year round you can experience and participate in the celebration of South Tyrolean traditions and customs on the Renon mountain. What is ancient and well-established, and already inspired our ancestors, is revived and celebrated throughout a colorful annual cycle of festivities. 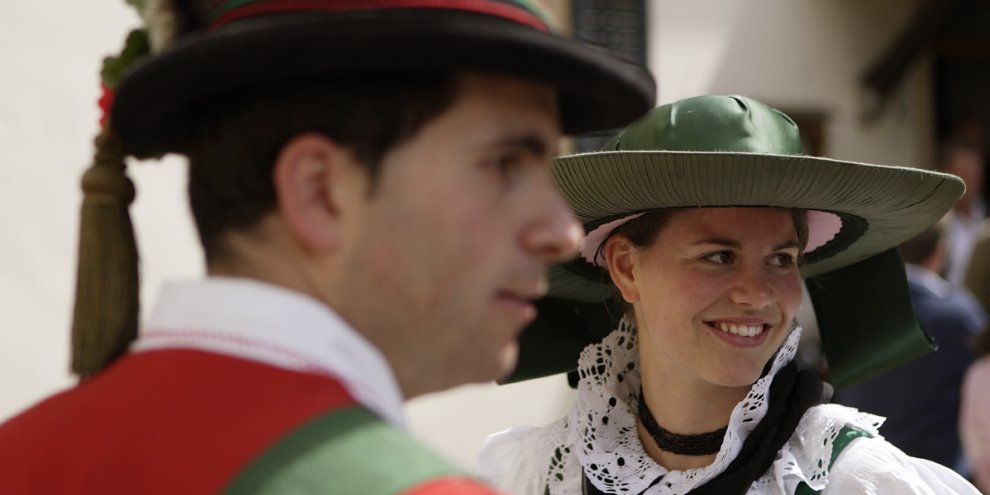 Traditional Bands & the Ritten Tracht
You can applaud them on every holiday, at every festivity and at unscheduled concerts: South Tyrol's traditional bands. Donning their traditional costumes, marching along in coherence, playing the sounds of tradition but also contemporary tunes, they enliven the region. On the Renon mountain, there are a total of 6 such village brass bands. In all of South Tyrol, there are nearly 10000 registered musicians. More than half of them are younger than 30 years old. The next concert
The Rittner Tracht for viewing every Wednesday and Friday from 16.00 to 18.00 in the Kommende Lengmoos. What belongs to a real woman's costume? The Leibl (bodice) with embroidered hem, the black Kittl (skirt), a white blouse with puffed sleeves and lace collar. The men's costume includes a wide-brimmed huat with red and green strings, a double gamecock butt and a white feather. The pfoat (shirt) is made of linen with wide sleeves that line the shoulders and with an embroidered collar. Suede trousers with embroidery and decorations, but only down to below the knee, and a belt with feather handle embroidery. The traditional costume is something unique, something special that sets us apart from others, just be dashing!


The blazing Heart of Jesus
It was 1796, when the French Troupes under the command of Napoleon marched from Italy towards Tyrol. The Tyrolean estates gathered in Bozen/Bolzano to decree defense and war arrangements. They pledged their troth to the sacred heart of Jesus, calling upon His power to defend their land. Around 80 years after this covenant was made, an old pagan custom was revived on the Heart-of-Jesus Sunday, the third Sunday after the Pentecost: Everywhere in the mountains mighty bonfires were lit. Ever since then, these bonfires are lit every year, and all across South Tyrol on the night of Heart-of- Jesus Sunday fires on mountain peaks and plateaus illuminate the skies. This spectacle is of course best observed and enjoyed from the Renon mountain with its 360° panoramic view.

Summer Retreat
The summer retreat on the Renon mountain has its origins in the 17th century. But don’t you think that it’s been lost in the mists of time! Renon still remains an attractive retreat during the summer months, as Bolzano citizens continue to escape the heat and flock to their local mountain. Some stay for the summer in one of the historic summer retreat mansions, whose walls have witnessed centuries of history. Others simply enjoy a day trip, breathing the fresh air and taking in one of the most beautiful panoramic views around.

Kirchtag Fair
Each little village in South Tyrol has its own little “Kirchtag” - well, every village with a church, that is. The “Kirchtag”, meaning “Day of the Church”, was originally celebrated on the anniversary of a church’s consecration. Today, in many places, it’s celebrated on the Patron Saint’s day of the respective church. The religious ceremony featuring a mass and often a festive, totally worth-seeing procession is usually followed by a folk fair with food, drink, music and all sorts of entertainment for young and old.

Summer on alpine pastures
When summer comes to an end, everywhere in South Tyrol cattle is brought back down to lower dwellings from the mountain pastures. And so, on the Renon mountain, on August 24, Saint Bartholomew's Day, farmers bring home the cattle. Animals return after having spent the summer grazing amidst the pastures and the fresh air of Corno del Renon. All the cattle is herded together to a pasture, farmers gather and examine their animals and negotiate amongst each other. This livestock market is celebrated with a big and popular mountain festival, where tasty authentic goodies are served, music is played and “Goaßlschnöller” show their skills, letting their ropes rip through the air with cracking sounds.

Caspar, Melchior and Balthasar
On doorframes, above gates and entrances in Renon and in all of South Tyrol you may find the inscription “C+M+B”. These are the symbols of a Christmas tradition originally carried out mostly on the Twelfth Night, when carol singers go from door to door, perform a song and raise money for a charity. After their performance they will write, let’s say “20 C+M+B 15”, on the doorframes with sacred chalk. The numbers represent the respective year. The three letters, C, M, and B don’t stand for the names of the three wise men Caspar, Melchior und Balthasar, as one would expect, but for the blessing “Christus Mansionem Benedicat“, which means „May Christ bless this house” in Latin. 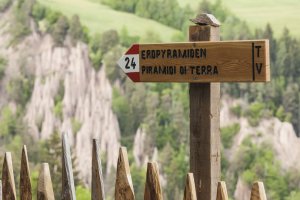 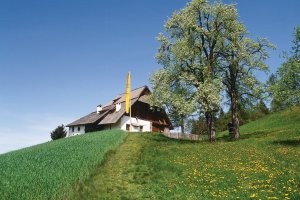